Elizabeth Warren is an economics ignoramus and thus unqualified to be President of the United States. She does not know that the wealth of the hated rich is in the form of capital—means of production—and as such is the foundation of the supply of products and the demand for labor.

Elizabeth Warren’s program is a call for mass impoverishment. And the same is true of the essentially similar programs of her fellow haters of the rich, such as Bernie Sanders and AOC.

These haters of the rich think they can get away with it because the rich are a small minority and do not have nearly the number of votes as the mobs the haters are trying to inflame. (This is what the haters mean by “democracy.”)

The rational self-interest of everyone lies with the freedom of everyone to become as rich and successful as he can. In a capitalist economy, others’ greater success is not the measure of our failure but the major source of our success.

I am benefitted by the billions of Bezos, Gates, and Buffet et al. If they were no richer than peasant farmers, I would be impoverished. If they were half as rich as they are, I would be much less well-off than I am.

Under capitalism, the effects of unequal wealth run parallel to those of unequal intelligence. The intelligence of Aristotle and Newton and all the other great geniuses of philosophy, science, mathematics, and the arts, cost the average person nothing, but give him everything.

The wealth of the rich, bearing the imprint of the discoveries of geniuses and employed in producing products that the average person buys and in employing the labor that he sells is responsible for the great and growing wealth the average person enjoys under capitalism.

Warren, Sanders, and probably the whole rest of the field of Democratic contenders should withdraw in shame for their ignorance of economics.

If they’d like to learn economics, they should start with my essay “HOW THE 1 PERCENT PROVIDES THE STANDARD OF LIVING OF THE 99 PERCENT.” It’s available for 99¢ at https://amzn.to/32T8Sg4. 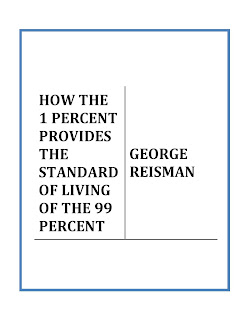 After that, they should read the works of Ludwig von Mises (https://mises.org/) and Ayn Rand (https://aynrand.org/) and my own Capitalism: A Treatise on Economics (https://amzn.to/2PM19ut).

Maybe they will then become defenders rather than destroyers of wealth, capital, and capitalism. 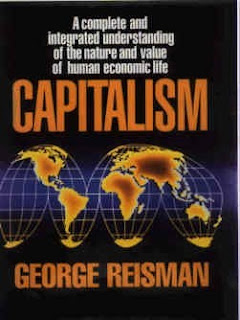 A link to the audio/visual version of this post: