Columbus Day, which this year marks the 528th anniversary of Columbus’s discovery of America, is one week from today.

Membership in Western Civilization is achieved by anyone who makes it his intellectual home and sees the world from that perspective.

Western Civilization is a body of ideas and values, capable of being accepted and made their own by people everywhere, irrespective of race or ethnicity.

From the perspective of intellectual and cultural content, Western civilization represents an understanding and acceptance of the following: the laws of logic; the concept of causality and, consequently, of a universe ruled by natural laws intelligible to man;

on these foundations, the whole known corpus of the laws of mathematics and science; the individual's self-responsibility based on his free will to choose between good and evil; the value of man above all other species on the basis of his unique possession of the power of reason;

the value and competence of the individual human being and his corollary possession of individual rights, among them the right to life, liberty, property, and the pursuit of happiness; the need for limited government and for the individual's freedom from the state;

on this entire preceding foundation, the validity of capitalism, with its unprecedented and continuing economic development in terms of division of labor, technological progress, capital accumulation, and rising living standards;

in addition, the importance of visual arts and literature depicting man as capable of facing the world with confidence in his power to succeed, and music featuring harmony and melody.

Wherever the intellectual substance of Western civilization is known, its imparting to the minds of students is virtually coextensive with the process of education.

For the intellectual substance of Western civilization is nothing other than the highest level of knowledge attained anywhere on earth, in virtually every aspect of every field.

Some of them can be seen smashing windows, looting stores, burning down buildings, and beating and killing people. The root of the problem is a racist educational system that identifies civilization and savagery as emanations of race, just as did the racists of the past.

The only difference is that today’s racists prefer savagery. 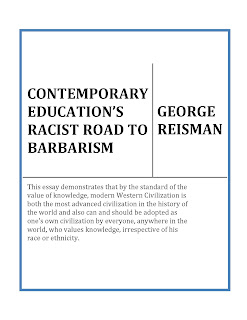