Capitalism Magazine has retweeted much of my thread on gun control as properly applying to the GOVERNMENT! (See https://twitter.com/CapitalismMag/status/1374753384612397065?s=20)

The Bill of Rights is a set of gun controls on the government. Each of the rights enumerated implicitly says that the government shall not use its guns to violate that right.

The Democratic Party, with its program of ever-increasing government power is the party of ever-growing gun violence.

Bernie Sanders and all other socialists are necessarily advocates of massive, limitless “gun violence.” Try to imagine socialism with the government deprived of the power to use guns or other weapons to seize and control the use of property. Next, imagine a square circle. 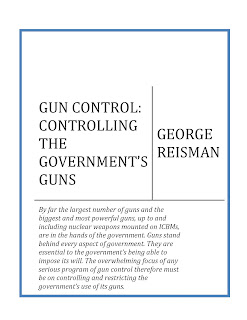 Everything a government does rests on the use of force. No law actually is a law unless it is backed by the threat of force.

Every law, regulation, ruling, edict, or decree rests ultimately on the threat to kill you if you disobey it, even a parking ticket.

“Government is in the last resort the employment of armed men, of policemen, gendarmes, soldiers, prison guards, and hangmen.”— Ludwig Mises

“The essential feature of government is the enforcement of its decrees by beating, killing, and imprisoning.”—Ludwig von Mises

Government is an institution of destruction, injury, and death, fit to be employed only against common criminals and aggressor governments.

Government is a dangerous beast that needs to be shackled, caged, and constantly guarded.

The Founding Fathers of the United States recognized the dangerous nature of government when they wrote the Constitution and Bill of Rights.

The Bill of Rights and Constitution are designed as shackles and a cage for the US government.

The Bill of Rights restrains the government. The Constitution confines it.

The welfare state is financed ultimately on a foundation of death threats that force you to pay the taxes that support it.

“Do-Gooders” do their alleged good at the point of a gun.

If the 2 million Jews shot and the 4 million gassed had had guns, far fewer of them would have been killed.