What is “white supremacy,” besides being an expression I had virtually never heard of until a few months ago when it was shoved into the world as an allegedly powerful and dangerous force?

Is it a belief, a doctrine, a political movement? What are its sources? Who are its leaders? What is its leading book(s)? What is its program? Is it real or a manufactured bugaboo designed to frighten people who have the mentality of small children?

What can it possibly do in the way of harm to anyone that is not already fully prohibited by existing laws, such as those against murder, robbery, extortion, arson, and rape?

Is “white supremacy” intended to serve as a pretext for vigorous law enforcement against a phantom phenomenon, thereby counterbalancing the lack of law enforcement against real, highly destructive movements such as BLM and “Antifa”?
To learn more about the subject of racism, see Reisman’s Capitalism: The Cure for Racism, available for 99¢ at https://amzn.to/3fL4xoK 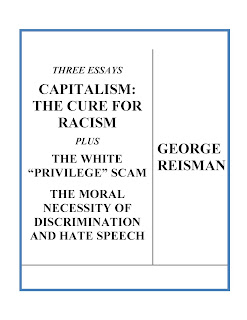